The two mystery ships pictured in Newhaven are refrigerated ships. In the forefront is the Soviet Vasiliy Fesenkov, built in 1974 in Gdansk in Poland (6,391gt, 139m length), which was part of the famous and popular B-437 series of 14 reefer ships, many of which were built for USSR shipping companies. The ship traded for Sudoimport (Soviet Union) and was a frequent visitor to Newhaven. In 1991 she was sold at which point she became Vasiliy Fesenkov, and in September 1999 she was scrapped in Alang. The other mystery ship, another reefer, was operated by W. Bruns & Co of Hamburg. She was one of a series of nine ships built by various German shipyards between 1963 and 1965 for the import of bananas from Colombia (4,700gt, 136m length). The photo was probably taken in 1974-75, because most of these ships were sold by Bruns in 1972. Every ship had the prefix ‘Bruns’ in its name. This ship could be Brunsrode, Brunsbüttel or Brunsland. Most ships were scrapped in the 1980s. 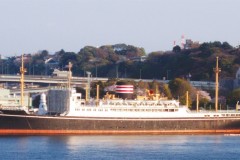 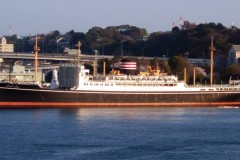