John Periam and Geoffrey Lee had the opportunity to spend time on the Royal Navy Fisheries Patrol Vessel HMS Mersey under the Command of Lt Cdr Sarah Oakley RN, who talked about her career and current command.

How long have you been CO of HMS Mersey?

This is my first command of a ship, and I have been in the job since May 2012. Before that I worked on a variety of warships, operating from the Atlantic to the Middle East and I have also worked training junior officers at Britannia Royal Naval College in Dartmouth, Devon. My first job was as a Gunnery Officer in HMS Alderney, so I already knew the ins and outs of British Seas Fishery Enforcement before I took command of HMS Mersey.

What are your main roles?

As Commanding Officer HMS Mersey, I lead my Ship’s Company of 48 to meet the requirements of the Fleet Commander. Our main focus is marine enforcement duties with the Marine Management Organisation, but we also conduct Maritime Security patrol around UK waters. We regularly interact with other agencies around the UK, such as the UK Border Force, Maritime and Coastguard Agency, Serious and Organised Crime Agency, the RAF and UK Special Forces.

Why did you join the Navy?

I joined the RN in September 1995 after reading history at university. I knew I wanted to do something different and more active rather than read books and write essays, and the idea of working in an office did not appeal. I also knew that, as a naval officer, I would get lots of responsibility at a young age, and the opportunity to get paid to travel around the world definitely sounded good.

As a female Commanding Officer, you are one of a minority in the Royal Navy.

I knew when I joined the Navy that I was going to be in a minority as a female. At university the ratio at my college was 7:2 male to female so I think this was good preparation. I believe the average figure for females in the RN is just under ten per cent across ranks and rates. At the moment I have 12 of 48 crew who are females. This is unusual, but due to the layout of accommodation on HMS Mersey, it is much easier to accommodate more females. They span a wide variety of ranks and rates and specialisations, from Able Rates to myself, a Lieutenant Commander.

What’s the best part about your job?

The most rewarding part of my career before taking command of HMS Mersey was working as the Operations Officer for the Combined Task Group Iraqi Maritime, living for seven months on an Iraqi oil platform and assisting with the transfer of the protection of the Oil Platforms from Coalition to Iraqi control. The best part of my job is the crew and the people. HMS Mersey has a fantastic crew and we regularly host visitors from other walks of life. Recently we have hosted university students, UK Border Force staff, Sea Cadets and Royal Navy Reservists who were training before their first deployment. Each person has a story to tell and adds to the team. It’s a constantly shifting work atmosphere that you don’t get anywhere else.

Tell us about HMS Mersey.

Mersey is one of three river class off shore patrol vessels in the Royal Navy. Displacing 1,680 tonnes, she is 80m long and 14m wide. Propelled by two Rushton diesel engines, she has a top speed of 20 knots and a range of over 5,000 miles, enough to go three and a half times round the UK by sea. We have two Pacific 22 Rigid Inflatable Seaboats, a 20mm GAMBO gun and two General Purpose Machine Guns. 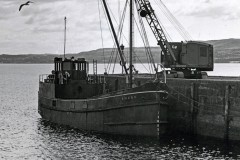 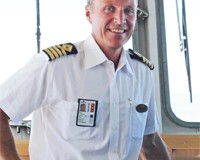