Only one reader was able to provide any information about the Mystery Ship in March. Dr Anttiheikki Helenius from Hyvinkää in Finland wrote:

The mystery ship is a yacht called Nourmahal. She was built in 1884 at the Harlan & Hollingsworth shipyard in Wilmington, Delaware, USA for William Astor. The vessel used both steam power and sails as propulsion, and was equipped with a bark rig. Her length was 250ft and she was of 745gt. Designed by Gustav Hillman, the yacht was later owned by John Jacob Astor IV, who went down with Titanic in 1912. Nourmahal was transferred to the US Navy in 1917. 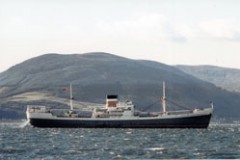