This photograph was taken from the bridge of a cargo ship heading up the Manchester Ship Canal and about to pass the wharf at Ellesmere Port. The nearer ship alongside the wharf, Crania, was a tanker of 9,094gt, built in 1955 by van der Giessen and owned at the time by Shell Tankers NV, Den Haag. Crania would have been moored here only temporarily, as she would have loaded refined products at one of Shell’s installations, and may well have been destined for Rotterdam. She was a regular visitor to the Ship Canal until 1984.

Beyond Crania is a small container ship, one of eight sisters operated by Ellermans on their container service between Ellesmere Port and ports in the Mediterranean or on the Iberian Peninsula. They initially carried names of rivers, but in 1974 all were given ‘City’ names, but her name is too small to read in the photo.

The tug assisting the cargo liner was owned by the Manchester Ship Canal Company, but is difficult to identify positively, as in the 1970s there were at least eight in service of the same design in which exhaust outlets were built into the tripod masts. Roy FentonLondon 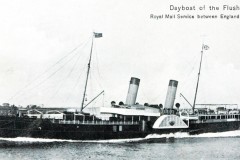