The October Mystery Ship is the 4,119grt ‘turret’ steamer Pearlmoor, which was designed and completed in 1905 by W. Doxford & Sons at their Pallion Yard on the Wear, to the order of Walter Runciman & Co’s Moor Line of Newcastle, to replace an earlier (1897-built) ‘turret’ namesake, which had been wrecked off the Arabian Sea coast of Oman in November 1904. Measuring 350ft by 51ft 1in by 24ft Pearlmoor was powered by a 310nhp triple expansion engine constructed by her builder which gave her a top speed of ten knots.

In 1919 she was sold to Western Counties Shipping of Cardiff who, in 1920, renamed her Pearlmead. This was followed byfour further sales and transfers to London-based, German and ultimately Brazilian owners, when she was renamed Anneliese andlater became Uru in 1922 and 1925 respectively.She was finally demolished during June 1957 at Rio de Janeiro by Laminacao Ltda.The exact location of the photo, and where the adjacent vesselismoored, is difficult to determine,but a guesswould besome north-east port.

As for the adjacent vessel, there is an apparent lack of ‘cue’ material toaccurately identify her. Whilethe black-and-white photographmay lead to ambiguity, I believe that, from her funnel markings and pale grey hull, she appears to be either a ship of the Silver Line of London (S. & J. Thompson & Co, Managers) or a Furness Group company vessel, possiblyfrom Prince Line Ltd of Newcastle, and in post-World War I markings. 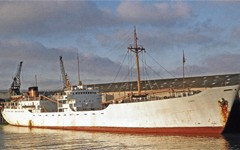