Close scrutiny of the photograph reveals the vessel to be Lempa, the second of two identical fruit ships completed in late 1952 by the German shipbuilders Bremer Vulkan atVegesak for the Honduran subsidiary of the US-controlled United Fruit Company, Empresa Hondurena de Vapores, and registered at Tela.

Lempa and her sister Leon, initially2,816gt and 2,970dwt respectively, shared overall dimensions of 104.7m by 13.7m and were powered by paired oil engines with a service speed of 14 knots. They operated principally in the carriage of bananas on routes between the Caribbean and US Eastern seaboard ports until 1959, when United Fruit became part of the United Brands conglomerate, resulting in a major fleet rationalisation. Ownership of the pair was transferred to the Fyffes subsidiary, the Surrey Shipping Company of London, for their operation under the British flag, and they were renamed Leith Hill and Box Hill respectively.

During 1964 thetwo were lengthened by 7.9m.Leith Hill’s tonnage increased to 3,253gt as a result. In 1966Leith Hill and her sister were returned to Honduran ownership and registered at Puerto Cortes, and reverted to their original names.

The photo shows Lempa in her United Fruit funnel colouring ofdarkbuff (yellow) with black top, after her lengthening and return to the Honduran flag and following removal ofher 20-ton SWL heavy lift derrick. 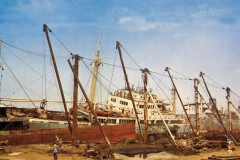