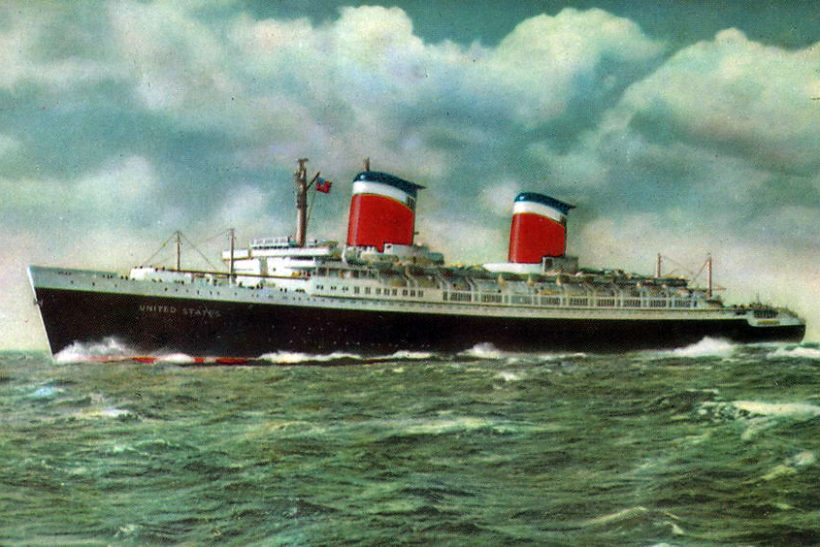 Dene Bebbington recalls how one man’s dream to design an American superliner, the SS United States, was turned into reality, and how the ship went on to become a record breaker.

In the first half of the 20th century the transatlantic liner market was dominated by ships flagged in Britain, France, Italy and Germany. The coveted Blue Riband speed record changed hands mainly between the ships of those nations, but one man, William Francis Gibbs (1886-1967), had a dream to design and build a superliner which would put the United States at the forefront of liner technology and take the coveted record.

Gibbs developed a passion for ships after watching the launch of the SS St Louis in 1894. From a young age he read engineering journals and, despite relatively poor high school grades, gained a place at Harvard’s Lawrence Scientific School, probably thanks to his very wealthy father. His grades at Harvard were also lacklustre. For someone with an interest in engineering this may seem odd, but was likely due to a lack of maths ability.

From 1913, with his brother Frederic, who focused on the financial aspects, Gibbs spent his spare time designing a pair of superliners, which would be 1,001ft (305m) long and incorporate lessons learnt from issues in the design of other liners, such as White Star Line’s ill-fated Titanic. It would also be faster than the Cunard Line’s Mauretania, which held the eastbound Blue Riband from 1907 to 1928. For the Gibbs brothers, finding someone who would finance such a project, and one proposed by amateur designers with no shipbuilding industry experience, was as big a challenge as designing the ships.

Power was a crucial issue. Only an electric drive could supply the horsepower required to surpass Mauretania’s top speed. The Gibbs brothers secured a meeting with the chief engineer at the General Electric Company, William LeRoy Emmet, who, luckily for them, was keen to beat the British Parsons steam turbines used in Mauretania. Impressed with the Gibbs’ ideas, General Electric agreed to design electric turbines of 180,000hp.

The project was furthered when Rear Admiral David W. Taylor agreed to build and test a 1:24th scale model at a US Navy facility. The 41.7ft (12.7m) wooden model, incorporating changes made by Taylor, was designated project S-171. With the support of General Electric and Admiral Taylor, the brothers approached financier J.P. Morgan Jr, and Philip Franklin, of International Mercantile Marine, in 1916. The businessmen agreed to finance two superliners costing around $30 million each. But Gibbs’ dream was put into the background when the US entered the war in April 1917.

The German liner Vaterland was seized in the US and renamed USS Leviathan, which served as a troopship towards the end of the war. From late 1919 Gibbs and his team reverse-engineered drawings from a detailed physical inspection of the ship. As Leviathan, she went on to become a United States Line ocean liner between 1923 and 1933. But, unfortunately for the US liner market, Prohibition between 1920 and 1933 drove many passengers away from US vessels, since the European ships served alcohol.

During the 1920s Gibbs continued to work on ships, designing the liner Malolo and founding the Gibbs & Cox naval architecture company.He emphasised safety in excess of regulations, even though it increased building costs, but Malolo’s collision with a freighter vindicated his approach, as she still reached port despite being flooded with thousands of tons of seawater, which could have sunk other ships. His concern for safety intensified in 1934, when Morro Castle, en route from Havana, Cuba, to New York, caught fire. A total of 137 passengers and crew died.

During World War II Gibbs & Cox designed naval vessels, but by 1947 the political and commercial climate was finally right for the superliner project, helped by government subsidies and the requirement that the liner should be convertible to a troopship. The British had shown the importance of this flexibility with Queen Mary and Queen Elizabeth, which both served as troopships during the war.

A contract for Design 12202, to be named United States, was signed on 8 May 1949 and a model of the ship was shown to the press. Finally, Gibbs’ long-held dream was to become a reality, but only as a single ship rather than the pair originally envisaged. Hull 488 was laid down on 8 February 1950 by the Newport News Shipbuilding and Drydock Co in Virginia.

In a change to convention, steel plates on the new ship were welded rather than riveted, to create less drag. To reduce vibration, caused by cavitation from the propellers, a novel configuration was developed. Unusually for the time, it was designed by a female propulsion engineer, Elaine Kaplan, and her colleagues. The outboard propellers had four 18ft (5.5m) manganese bronze blades, while the inboard ones had five. Power was generated by four Westinghouse double-reduction geared steam turbines, and eight Babcock & Wilcox boilers operating at a pressure of 925psi and temperature of 975°F (524°C). This gave United States the highest power-to-weight ratio of any commercial ship. 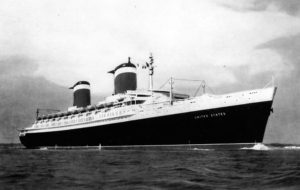 Another innovation was the use of aluminium in the superstructure to reduce weight. This meant a lower centre of gravity and a more streamlined hull compared to other liners. To stop the corrosive reaction created when aluminium was connected directly to steel, an insulating material had to be used. After experiments with different materials, DuPont PAW tape was chosen. Like Queen Elizabeth, United States was to have two funnels, the largest measuring 55ft (16.8m) tall and 60ft (18.3m) across at the base, in a teardrop shape. Horizontal fins were added to prevent exhaust matter falling on passengers.

Gibbs’ attention to detail included tuning the ship’s whistle, which he wanted to have a unique bellow. Likewise, he exercised control over the ship’s interiors by authorising all fittings. He was adamant that no wood be used, because fire was the greatest danger to big ships. Steinway pianos were an exception since, surprisingly, they were shown not to burn when covered in gasoline and set alight. Compared to European liners, United States had more modern and spacious cabins and public rooms.

The ship’s top speed was kept secret, but she comfortably took the Blue Riband in 1952, averaging over 35 knots on the eastbound journey, about four knots faster than Queen Mary, which had held the record from 1938. Air travel increasingly took over transatlantic passenger traffic, and so competition for the Blue Riband abated, leaving United States as the last record holder.

Her maiden voyage took place on 3 July 1952, but she was taken out of service less than 20 years later in November 1969, two years after the death of William Francis Gibbs. The 1960s saw her fortunes hit as passengers were lost to aviation, industrial disputes pushed up operating costs, and a contract to transport military personnel to Europe was lost. Even running winter cruises to the Caribbean and South America was not enough to keep her commercially viable.

However, despite her commercial demise, Gibbs’ ship still survives, albeit in a steadily deteriorating state, at Pier 82 in Philadelphia, but with her future looking bright, as the SS United States Conservancy is working with RXR Reality to repurpose her as a floating hotel and cultural destination.

For more information about the ss United States, see www.SSUSC.org.

For the article and more photos, buy the Jan 2021 issue of Ships Monthly here. 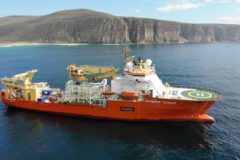 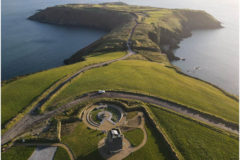