Master of Portsmouth-Fishbourne ferry St Clare, Captain David Mihell, talks to Nicholas Leach about his career with Sealink, Sea Containers and Wightlink, and the ships on which he has served.

When did you first go to sea and with which company?I am Portsmouth born and bred, and first went to sea with Sealink in 1976. I stayed with the operation during the transfers to Sea Containers and Wightlink. When I joined Sealink, I served on the passenger ferries and then moved to the car ferries. I have recently been trained to work onthe catamarans.

What led you to choose acareer at sea?When I left school I noticed a seasonal job advertised with Sealink ferries, applied and got taken on in 1976. It was in the Catering Department ashore, but I progressed to the ferries Southsea, Brading and Shanklin on the Portsmouth-Ryde route. Inthe 1970s foot passengers were the main cargo and over 1,000 could be taken on these ferries. Istarted at the bottom and worked my way up.

How long have you been with Sealink ferries?I have worked this route for 34 years, manning all of the vessels that the company has owned. After Southsea, I moved to the car ferries, starting with Fishbourne and Camber Queen. I transferred from BR/Sealink to Sea Containers and then Wightlink. I have worked on car ferries since the 1980s, always out of Portsmouth.

Which ships have positive memories for you? My favourite ships were Southsea, Brading and Shanklin. That’s not to say that the modern ships are bad, and with St Clare I was lucky to get the chance to go to Poland and pick her up as a newbuild, so she is also special to me. With the catamarans I have added a new string to my bow by sailing on them as master. Itproves that you can never get stale in this job.

What are the routines and procedures on board?The shifts are between six and ten hours, and we operate with a maximum crew of 12. A typical six-hour shift starts at 0645 and takes in three round trips. The crossings can also get very busy, and on a summer day we can carry on average 500 passengers per crossing with full car decks. 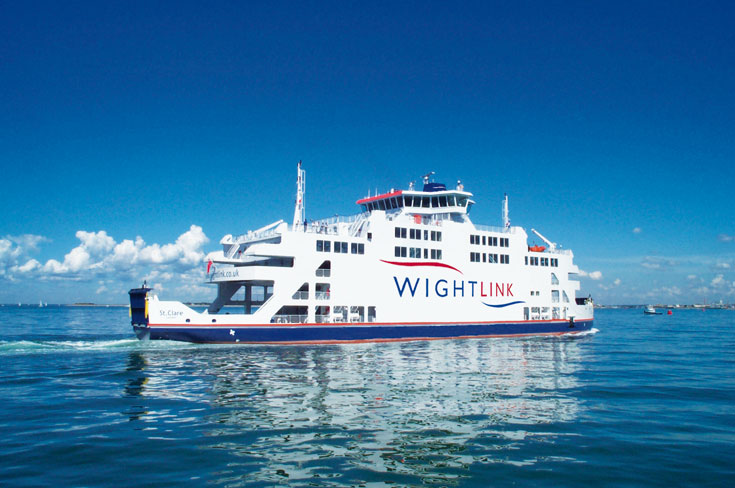 Do you have any unfulfilled ambitions?To become a permanent master on the Portsmouth-Ryde route.

What kind of special knowledge do you need for working on this ship?As master, I have to hold a Master’s Certificate, either limited or unlimited, which is issued by the MCA. I also have to hold a Pilotage Exemption Certificate, something all the masters must have. As well as the certificates, we need a good knowledge and plenty of experience of using the Voith Schneider drives. These work completely differently from screws and bow thrusters, which the catamarans use. But as relief master I work on the catamarans some days and on the car ferries other days, depending on where I am needed.

How does poor weather affect operations?Bad weather in the Solent is not really an issue for the ferries, although we do have company guidelines to follow. Any restrictions on crossings occur because of strong winds which canmake berthing difficult.

What is the most useful innovation introduced since your career started?Some of the modern electronics on board the ships are very good, especially the modern radars and electronic charts.

Wightlink info • You can travel to the Isle of Wight with Wightlink (0871 376 1000 www.wightlink.co.uk) on its 40-minute Portsmouth–Fishbourne crossing, one of three Wightlink routes. Car ferry crossings also operate between Lymington and Yarmouth (30 minutes) and there is a passenger catamaran service from Portsmouth Harbour to Ryde Pier Head. A day return ticket for a car and up to four passengers costs from £36. See www.wightlink.co.uk.