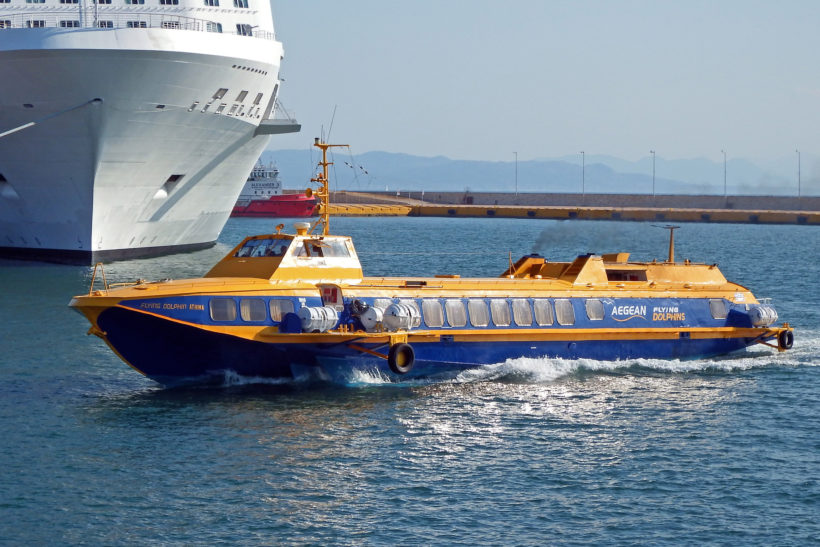 Hydrofoil operations around the world are unusual, but John Pagni photographed some of these vessels operating in Greek waters. Hellenic Seaways’ Flying Dolphin 19 speeding back to Piraeus following a Saronic Gulf round trip calling at Aegina, Poros, Ermioni, Porto Heli, Agistri, Hydra and Spetses. She will be one of the last three to be retired in 2022, when three catamarans from Norway’s Brødrene yard are due enter service. All the hydrofoils were built in the Soviet Union, which developed the type in the late 20th century. Iviskos on her Rhodes-Marmaris route between Greece and Turkey in 2011. The service appears to have ceased in 2015. Iviskos was built in 1995 at the Volga Shipyard in Russia. The 34m craft could carry 152 passengers and was powered by two MTU engines generating 2520kW giving a speed of 38 knots. The 135gt craft is now for sale. Greek Kos-Bodrum operator Laumzis Sun Lines used two hydrofoils, as shown by this 2007 photo of a Kommeta type hydrofoil, built in the Soviet Union in 1983, in Bodrum. The company’s two hydrofoils carried 124 passengers, but they have been withdrawn and are now offered for sale. Aegean Flying Dolphins hydrofoil Erato leaving Skopelos’s port of Chora in June 2017 as the then Aqua Ferries’ ferry Mirtidiotissa arrives from Skyros. Based in the west coast city of Volos, Erato runs to the Sporadic islands of Skiathos, Skopelos and Alonnisos. The 1975-built 18-knot Mirtidiotissa’s capacity of 1,350 passengers and 276 lane metres for vehicles dwarfs Erato’s 155-passenger load, although at 35 knots the latter is a lot faster. Bodrum Express Lines hydrofoil Ege Princess at the Bodrum terminal in May 2007. She operated between the Turkish city and the Greek resort island of Kos several times daily, taking mainly day-trippers from Greece to Turkey. She was one of two Kometa-type hydrofoils used by BEL, which also operated three smaller Voskod-type craft. Both types carried up to 80 passengers and were powered by two 1,000hp engines giving a top speed of 33 knots, with the voyage lasting about an hour depending on conditions. Onboard facilities consisted of two lounges, a bar and two toilet areas. All five flew the Turkish flag. Aegean Flying Dolphins’ Athina slowly approaching her Piraeus berth, passing by a small cruise ship at the harbour entrance in 2015. Her route, along with that of her sistership Venus l, takes in the Saronic Gulf ports of Aegina, Poros, Methana and Agistri. Relatively large, the Russia-built craft carries 155 passengers at 35 knots in the standard hull, which measures 35m by 6m. 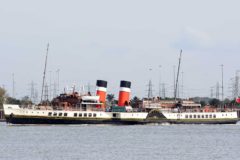 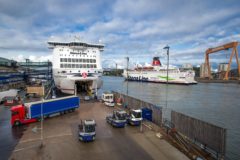