The two Castle class OPVs sold to Bangladesh have completed their multi-million pound refits at A&P’s Hebburn shipyard. The ships, renamed BNS Dhaleshwari (F36) and BNS Bijoy (F35), were formally handed over on 24 September. The Bangladeshi Navy classify them as corvettes and will probably equip them with a missile system at some stage.

Aside from a single Korean-built frigate, they are the navy’s only helicopter-capable warships.After being laid up for a number of years, the pair underwent an extensive reactivation work package which involved an overhaul of their main engines, gearboxes, shafts and motors. They also hadnew diesel generators and deck cranes installed.

BNS Bijoy (ex-Dumbarton Castle) later suffered an electrical failure during sea trials and almost drifted into a breakwater in high winds as she disembarked a pilot near South Shields on 20 October. A lifeboat and tugs provided assistance, and she was subsequently towed back to the shipyard, where the problem was quickly diagnosed and fixed. 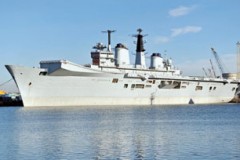