Carnival Cruise Lines’ 113,000gt Carnival Splendor was left drifting in calm Pacific seas after a fire broke out in her aft engine room at 0600 local time on 8 November, about 150 miles south of San Diego. There were no reported injuries among the 3,299 passengers or 1,167 crew members aboardthe vessel, which had sailed from her home port of Long Beach the previous day bound for the Mexican port of Puerto Vallarta.

The fire was extinguished after three hours but, despite their best efforts, engineers were unable to restore full power, and only emergency generators were available for essential needs. The US Coast Guard sent three Coast Guard cutters and an HC-130 Hercules aircraft, while the Mexican Navy also responded. Pallets of food supplies, including bread, milk and canned food, were transferred by helicopter as the cruise ship lost her stocks because of the lack of refrigeration. 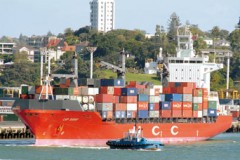