Carnival Cruise Lines is sending Carnival Destiny (1996/101,353gt) to Grand Bahama Shipyard, Freeport for a month-long extensive refit in early 2013, by which time she will be 17 years old. The Lido deck is to be completely restyled and the magrodome at the stern will be removed and replaced by new restaurants, Camp Carnival as well asthe WaterWorks.

The two-deck high Galaxy dining room will become a single level eatery, with a new steak house and Italian restaurant built into the same area on deck 4. All accommodation will receive a makeover, as will the spa area.

Carnival Destiny was the first cruise ship over 100,000gt in size and was followed by two slightly larger sisters, Carnival Triumph (1999) and Carnival Victory (2000), which will themselves receive similar treatment on reaching their 15th birthdays. The line’s subsequent Conquest class, and the Concordia class of subsidiary brand Costa Cruises, have all evolved from Carnival Destiny. 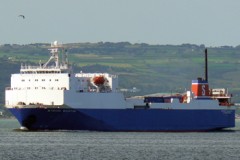