Around 60 cabins were affected, with 11 sustaining severe damage. The 1,680-passenger ship was returning to Shanghai at the end of a four-night cruise from Cheju, South Korea and docked later that morning at Waigaoqiao Port, where three of the mostly Asian passengers aboard were sent to a local hospital with minor injuries, with others treated on board.

Reports indicate that the cruise ship suffered a power glitch shortly before the incident occurred, and just as the local pilot was due to board it. Repairs were carried out at Changxing Island’s CIC ship repair yard in just 96 hours, where a new steel plate was welded onto the damaged hull. Costa Classica’s repositioning cruise to Hong Kong was cancelled while her next cruise was delayed by only two days. 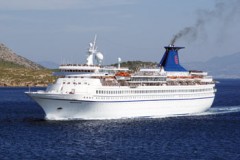