EUROPE: Europe Looks At The Future Of Ships

Europe has lost a good deal of its shipbuilding volume to Asian yards but its maritime industry is continuing to examine potential trends that it might take advantage of. A recent example of this is the use of LNG as a marine fuel (see SM, August). Wärtsilä, one of the main innovators in this domain, is also looking further afield to see if there might be new ship types on the horizon. Two interesting possibilities uncovered arelong distance water carriers and algaeharvesters. The company’s research to date has disclosed that there are two probable ‘certainties’ in the future: shipping will remain an important part of the transportation matrix and fresh water will become a more valuable commodity. Looking at the latter, Wärtsilä engineers have created a Water Carrier concept featuring a vessel similar in size to a conventional double-hull oil tanker with a deadweight of about 150,000 tonnes, thus close to a Suezmax-size ship.

However, to minimise the amount of fossil fuel needed to transport fresh water, the Water Carrier would be equipped with Flettner rotors to take energy from the wind and generate ‘free’ thrust. In addition, the vessel’s frictional resistance to moving through the water would be minimised by pumping lubrication air through underwater outlets in the ship’s hull. Both of these concepts have already been realised on other vessels. Flettner rotors were installed on Enercon’s E-Ship 1, which entered service last year, and NYK-Hinode Line’s twin module carriers Yamato and Yamatai both have air hull lubrication systems (see SM, Jan/Feb 2011). However, Wärtsilä’s Water Carrier will also incorporate a ‘Fishtail’ propulsion system that will make use of two large horizontal fins that will rotate during each movement to achieve the right angle of attack for incoming water.

As the large dimensions of the fins offer relatively low loadings, and rotational losses are not present in the vessel’s wake, this system could achieve very high levels of efficiency, although vessel speed would be low. Wärtsilä notes that the challenge will be to design a construction that moves the fins in the right manner while still offering a high level of reliability. The power to drive the fins will be generated by engines capable of burning diesel as well as biofuels and LNG. This will allow use of the most economical fuel at each point in time.

The expanding use of biofuels may generate the next Wärtsilä concept vessel, the ‘Algae Harvester’. Such a vessel would collect algae from enclosed basins floating in the sea by deploying hinged booms that would direct surface water into the vessel. Once inside, the water would be filtered to separate the algae, after which it would be transferred into two barges stored in recessed openings in the ship’s side.

Once a barge was full, it would be floated off, to be collected by a pusher tug, and taken to shore for offloading while an empty barge would be positioned in its place. The hinged booms, when not in use, would be folded against the hull to make a more streamlined shape. There would be no full-time crew on the Algae Harvester, as it would be operated from a shore-based control station via satellite. Most of the power needed by the ship would be produced by fuel cells running on biogas stored on board in liquid form. These fuel cells would supply the base load during slow-speed harvesting operations. When higher speeds would be needed, the vessel’s dual-fuel engines would be started up. Additional power would be available from a large solar panel that would be tilted to maximise energy production. Propulsion would be through a ‘low-loss’ electric drive system powering two pulling thrusters.

Beyond the Algae Harvester and Water Carrier, European designers are also looking at a number of static vessel types that could be anchored offshore to serve the needs of future mega-cities. These include floating desalination plants as well as barge-mounted waste-management and recycling facilities. 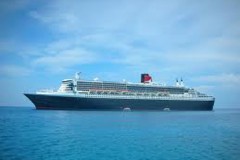 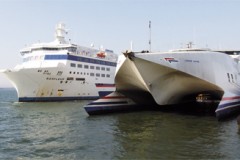