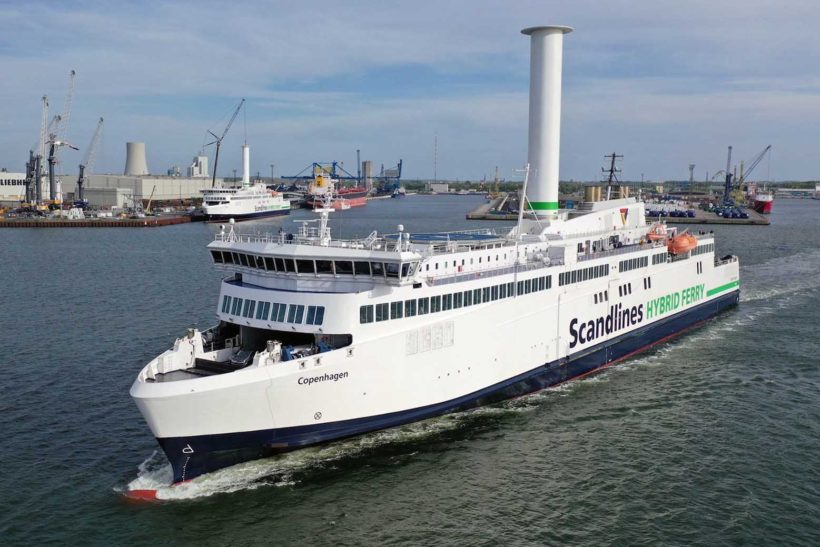 Danish-based ferry operator Scandlines has installed a Norsepower Rotor Sail on a second ferry as the company increasingly turns to wind-assisted propulsion to reduce fuel consumption and greenhouse gases.

Since 2013 Scandlines has invested more than EUR 300 million to build and convert conventional ferries into hybrid ferries.

In 2020 the ferry operator installed its first Norsepower Rotor Sail on the hybrid ferry Copenhagen, which operates on the Rostock-Gedser route between Germany and Denmark, which has been proven to achieve CO2 emissions reductions of four per cent on average, and by as much as 20 per cent on days with optimal wind conditions.

With the aim of becoming emission-free by 2040, Scandlines has had a Norsepower Rotor Sail installed on a second vessel, the hybrid ferry Berlin.

The Rotor Sail, which is a 30m-high rotating cylinder, was installed on Berlin while the vessel was in the port of Rostock, with the vessel being out service for only a few hours.

Norsepower Rotor Sails are a modern version of the Flettner rotor, which uses the Magnus effect to provide auxiliary propulsion to engine power.

When wind meets the spinning Rotor Sail, the airflow accelerates on one side of the Rotor Sail and decelerates on the opposite side. The change in the speed of airflow results in a pressure difference, which creates a lift force that is perpendicular to the wind flow direction.

Since its establishment in 2012, Norsepower has installed its Rotor Sail technology on six vessels, including one tanker, two passengers vessels, a VLOC bulk carrier, and two roll-on/roll-off vessels.

According to Scandlines, the technology is optimal for winds blowing 20m per second a little abaft abeam and perpendicular to the sail. The route between Gedser to the north and Rostock to the south is almost perpendicular to the prevailing wind from the west, making the route ideal for the use of Rotor Sails.

‘After positive experiences with the Rotor Sail on the hybrid ferry Copenhagen, Scandlines had prepared the sister ferry Berlin for a Rotor Sail as well. We are happy to see, that the installation was successfully completed and that the ferry went into operation again this morning as planned,’ said Michael Guldmann Petersen, COO at Scandlines. 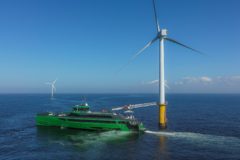 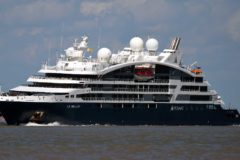 Le Bellot calls on the Thames