More than 400 passengers and crew members were hoisted off blazing Italian ferry Norman Atlantic in a 36-hour rescue operation involving Greek, Albanian and mainly Italian helicopters after a fire started on the vehicle deck of the 26,904gt vessel on 28 December 2014. The 2009-built Norman Atlantic was 80 miles west of Corfu sailing from Patras, Greece to the Italian port of Ancona on charter to ANEK Lines.

High seas and strong winds hampered rescue operations, with early figures reporting 13 fatalities on board, along with two crew members who died on an Albanian tug when a tow line snapped. There were fears the death toll could rise amid conflicting reports of passenger totals.

Norman Atlantic began a charter to ANEK at the beginning of December 2014 and unconfirmed reports suggested that two months had been given to fix deficiencies which came to light following a safety inspection by Greek authorities in Patras. There was also concern when freight drivers claimed to have been sleeping in the cabs of their vehicles due to all the vessel’s 428 cabin berths being occupied. Authorities announced plans for a criminal investigation after the vessel eventually reached an Italian port.

Norman Atlantic was one of the later ships in a series of over 20 similar ferries built in Italy at the Visentini yard in Porto Viro, and was completed for London-based Epic Shipping off-shoot Ermine Street Shipping before early acquisition by Visemar RoRo, an associate of the builders. She became Scintu for Italian operator Saremar in 2012 before 2013 spells with Grandi Navi Veloci and Moby Lines. She became Norman Atlantic in January 2014 when chartered by LD Lines for ‘Motorways of the Sea’ links between Saint-Nazaire and Gijon together with sailings to Rosslare. RP 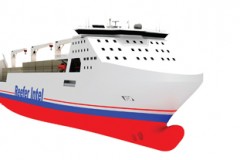 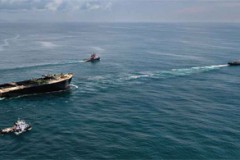