Progress on the French Navy’s next generation of nuclear-powered attack submarines has achieved another production milestone with completion of the first section of the second vessel, Duguay-Trouin, at DCNS’s Cherbourg facility. The steel alloy hull section weighing 40 tonnes will form part of the aft half of the hull, behind the nuclear reactor compartment and will accommodate the suspended block containing the electrical distribution plant. It will be followed by 20 other hull sections and four interface pieces.

Work on Suffren, the lead Barracuda type vessel, has reached an advanced stage, with the first equipment integration phases, when the hull sections are joined together, set to begin later this year. The 5,300- tonne submarines will be equipped with a mix of up to 20 Scalp-Naval land-attack cruise missiles, Exocet anti-ship missiles and the so-called future heavyweight torpedo. High levels of automation will allow them to operate with a crew of only 60. 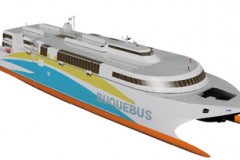