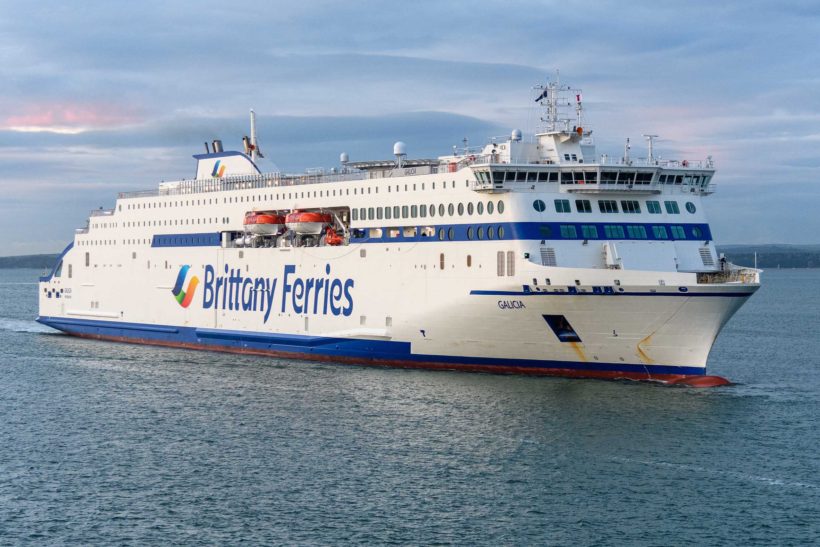 Brittany Ferries’ brand new 41,671gt Galicia made her maiden arrival to the UK on 13 October 2020, arriving at Portsmouth from Cherbourg in the early morning, having sailed from the AVIC Weihai Shipyard in China. She had been officially delivered on 3 September 2020 in China.

Galicia is the third of Stena’s E-Flexer class of ro-pax ferry, with the other two already delivered for Irish Sea service. She has been chartered by Brittany Ferries on a long-term basis and has been especially adapted for the French ferry company.

Brittany Ferries will also receive two others from the series, Salamanca and Santona, for their Spanish services. The latter two will be LNG-powered and due for delivery in 2022.

After berthing trials and taking on bunkers, Galicia sailed just before 1930 bound for trials at Plymouth and then onwards to Santander for further trials.

For the delivery voyage, the ship was registered in Portsmouth but, once handed over to Brittany Ferries in Santander, she will be re-registered under the French flag and dry docked for inspection before crew training begins.

The E-Flexers are a standard design developed for flexibility, and each vessel is tailored to customer needs. Brittany Ferries’ version has seen the car deck on deck 7 converted to cabins. This, in combination with the deckhouse having been extended on both decks 7 and 8, has enabled the number of cabins to be increased from 175 to 343.

In addition, the Galicia has two scrubbers, one for each main engine, and two extra lifeboats added due to the ferry’s increased passenger capacity.

The interior was designed by Richard Nilsson at Figura Architects, with whom Stena RoRo has had a long-standing collaboration.

The public spaces on decks 7 and 8 have been partially given over to other functions compared to the basic model, but largely follow the E-Flexer standard.

The design of the public spaces and the colour scheme, however, are unique and draw inspiration from Spain and the region after which the ship is named. 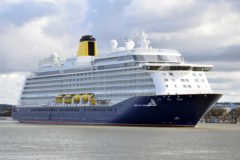 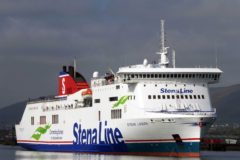