The Russian Foxtrot class submarine U475, which has been a semi-permanent fixture on the river Medway at Rochester, could soon be moving to a new home at Faversham if ambitious plans come to fruition.

The Cold War submarine, built in 1967 by the Soviet Union and capable of launching 22 torpedoes, was bought by its present owner John Sutton of Sidcup in 1994. He intended to transform her into a floating museum, but has instead she has languished on the river Medway for many years. Now a local newspaper, The Kent on Sunday, has joined in the campaign to give the submarine a permanent home at Faversham Creek, subject to the creek being suitably deep enough for this large vessel to navigate. 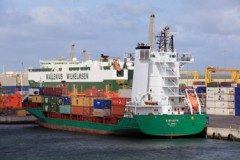