The Royal Navy ship HMS Shoreham made a final farewell visit to the Sussex town after which she was named.

HMS Shoreham was escorted into the Sussex port on 13 May by the Shoreham Harbour lifeboat Enid Collett, the pilot boat Deneb, and the port’s two tugs, Acamar and Adurni, which provided a fire monitor welcome.

The ship took part in a series of special public events in Shoreham-by-Sea, with over 1,500 people visiting the ship on an open day over the weekend visit.

The 40-strong crew took part in a final parade through the town before they returned the Freedom of the Borough scroll bestowed on the ship in 2011.

Equipped with specialist kit, underwater vehicles and a clearance diving team, Shoreham has been involved in keeping sea lanes open by ensuring there are no mines hindering the safe passage of shipping, in particular dealing with devices placed in deep waters, thanks to a sonar which detaches from the hull and can be lowered.

Launched at the Vosper Thornycroft yard in Southampton in 2001, she was commissioned the following year in her namesake Sussex town – the fifth Royal Navy vessel to bear the name.

In her 20 years of active service, the minehunter has alternated her time between training/operations in home and northern European waters, plus extended stints in the Middle East – typically three years at a time – as part of the Royal Navy’s Gulf-based forces.

The ship has clocked up more than 120,000 nautical miles – enough to take her around the world five and a half times – and visited more than 30 ports at home and abroad while serving under the White Ensign.

Shoreham returned to the UK in October 2021 after more than two years on her latest period of operations in the Gulf, operating out of the UK Naval Support Facility, Bahrain.

The ship left Shoreham on 16 May and made her way into Portsmouth, before heading East into the channel and onto Rosyth, where she will formally be commissioned and await her disposal. 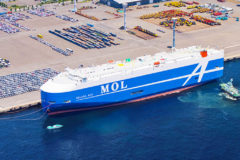