At the beginning of the year Poole’s first ro-ro ferry linkspan was removed for scrap to enable future development at the Dorset port. Opened in 1973 for use by Truckline sailingsto Cherbourg, the 7m wide linkspan was originally provided with a side-loading ramp for the discharge of trade cars.

Thelinkspan has been out of service for many years although it continued in use as a lay-by berth until recently. Poole Harbour Commissioners (PHC) plan to build a £800,000 marina for up to 59 boats on the site. Once contractors had completed demolision of the linkspan, work was expected to start on dismantling the last remaining static crane at the port. These green-painted cranes, acquired second-hand,were for decades a feature of the port’s skyline but difficulties inobtaining spare parts means they have been superceded by more efficient mobile cranes. In 2008 PHC took delivery of a Sennebogen 870R Special Materials Handler which was the first of its kind to be used at a UK port. 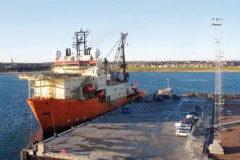