The Royal Australian Navy’s A$3 billion Landing Helicopter Dock project has passed significant milestones, with both ships at sea as the new year began. NUSHIP Canberra embarked on first-of-class sea trials in January as the hull of the second continued on its way to Australia, as cargo, after completion in Spain.

Canberra had earlier conducted successful initial harbour acceptance trials at the Port of Melbourne’s Webb Dock, where various types of Army vehicles, including an Abrams main battle tank and an armoured personnel carrier, were driven onto the ship via integral side ramp, manoeuvred around her two garage decks and disembarked down the ‘steel beach’ and out through the well dock. Canberra is due for delivery in May.

The future HMAS Adelaide was loaded onto the semi-submersible Blue Marlin at Vigo for transit to Australia in mid-December 2013, and is to arrive at BAE Systems’ Williamstown shipyard in Victoria in February. 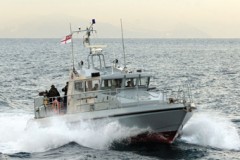 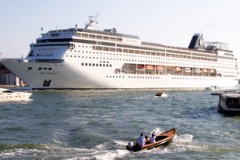 MSC CRUISES: Lengthening back in fashion