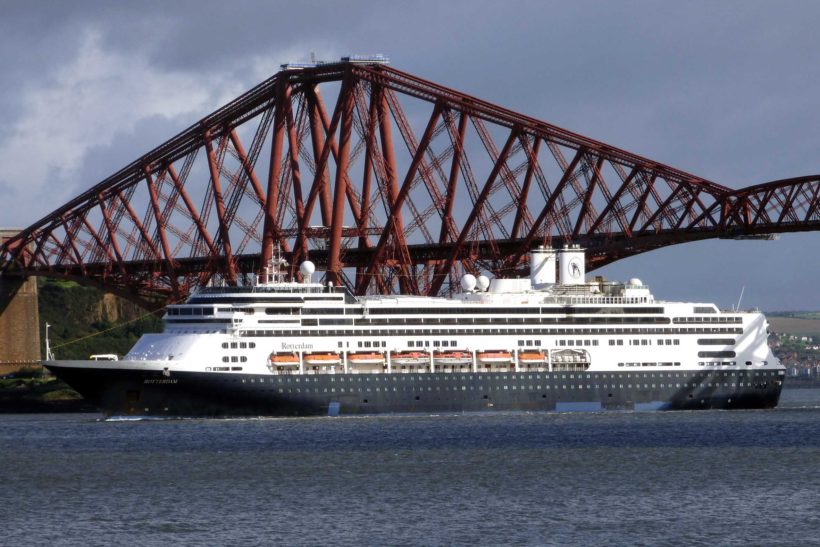 The first of Fred. Olsen Cruise Lines’ two new ships, Borealis, arrived in Rosyth, Scotland on 4 September 2020, joining the rest of the fleet.

The ship arrived at Babcock’s Rosyth Facilities after sailing beneath the iconic Forth and Queensferry bridges. The second of the new ships, Bolette, is due to arrive in mid-September.

Peter Deer, Managing Director at Fred. Olsen Cruise Lines, said: “It is great to see the first of our two new ships, Borealis, alongside next to the rest of our fleet.

“We can now begin our rebranding work to add those trademark Fred. Olsen touches to the interior and exterior of the vessel, including our famous red funnels.

“This is an important milestone for us and marks the start of a new future for our company.”

Having passed under the Forth Bridges at low tide due to air draft, she waited in the river for high tide to pass into Babcock Rosyth to join the Fred. Olsen fleet, which has been there since the end of May.

The Halve Maen logo as seen on the funnel came in use between 1936/1938 for publicity and baggage use.  For the logo they used ten Broek’s stylish Nieuw Amsterdam and replaced the sailing ship with the Henry Hudson ship Halve Maen.

The logo was dropped after 1973 for a new symbol, but around 1986 HAL revived the old logo and started using it on the ships’ funnels. In 2016 Holland America Line decided to update its image with a new brand campaign that introduced a refreshed logo with out the Halve Maen.  MS Rotterdam is the only ship in the fleet to still carry the old logo.

Halve Maen was a Dutch East India Company vlieboot (similar to a carrack) that sailed into what is now New York Harbor in September 1609, captained by the English captain Henry Hudson who  explored the East Coast of North America.

By courtesy of Iain McGeachy 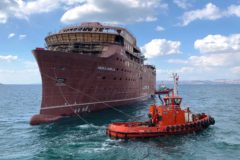 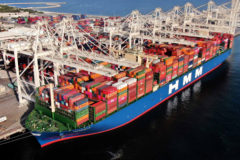