Royal Caribbean took delivery of the 5,400-passenger Allure of the Seas at the STX Europe shipyard in Turku, Finland on 28 October 2010, two years after construction began on the second of the two largest cruise ships in the world. The 225,282gt vessel arrived in Port Everglades on 11 November, where more than 12,000 plants were added to the Central Park and various other preparations were completed prior to undertaking a series of pre-inaugural events, which included her formal naming ceremony on 28 November attended by 3,500 guests, before she started her year-round Caribbean service on 1December.

Allure’s sistership Oasis of the Seas has been in service for a year but, while the ships are almost identical, Allure has several unique public features, such as the first Starbucks outlet and the first Guess store at sea.

Allure’s arrival marks Royal Caribbean’s 40th birthday almost to the day – it was on 7 November 1970 that its first ship, Song of Norway, sailed from Miami on her first cruise. Built at the Oy Wärtsilä AB yard in Helsinki, she was the first of three sisterships ordered by Royal Caribbean Cruise Line, which had been established two years earlier by Norwegian shipping companies Anders Wilhelmsen, I.M. Skaugen, and Gotaas-Larsen. Song of Norway now sails for Spain’s Happy Cruises as Ocean Pearl (1970/22,945). 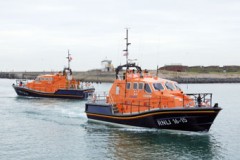 NEW LIFEBOAT: The latest in life-saving