The SDSR announcement has set out the future shape of the Royal Navy in 2020. The latest cutbacks will leave a highly capable force, albeit with fewer ships, with a fleet headed by a single Queen Elizabeth class aircraft carrier equipped for CATOBAR operations and the F-35C variant of the Joint Strike Fighter. The switch to an electromagnetic catapult and arrestor system will add at least £500 million to costs, but will make the flight deck inter-operable with US and French aircraft.

The navy’s cutting edge will also benefit from new state-of the-art vessels in six Type 45 destroyers and seven Astute class submarines. The overall number of escorts will be reduced from 23 to 19 destroyers and frigates, the casualties being four Type 22 frigates. From early in the next decade, the 13 remaining Type 23 frigates will begin to be replaced with Type 26 global combat ships.

The Royal Marines’ amphibious capability will be maintained, but pared down to a single LPH, a single LPD and three LSDs. Those vessels which are potentially surplus to requirements are HMS Ocean, Albion and RFA Largs Bay. 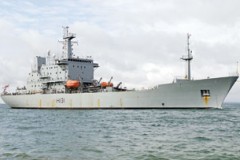 SURVEY SHIP: Back to the ice for Scott