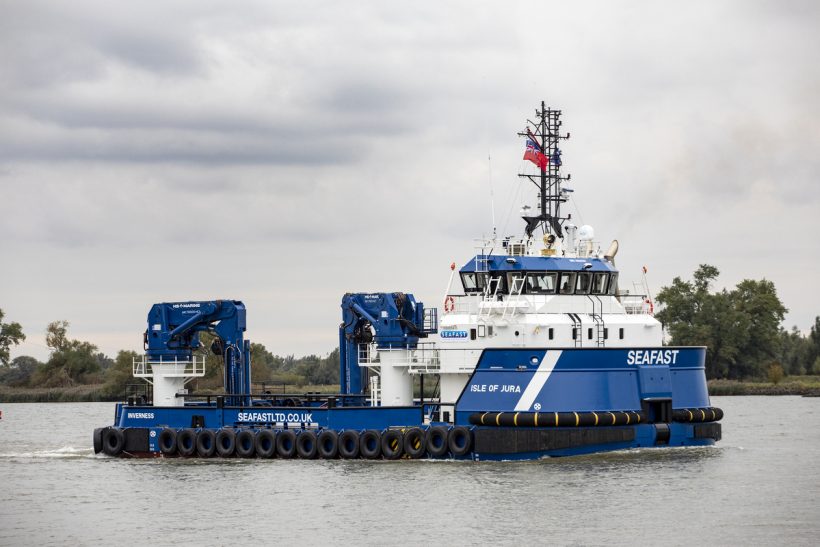 On Friday 18 October 2019 renewables service vessel (RSV) Isle of Jura was named at Damen Shipyards Hardinxveld in The Netherlands.

Isle of Jura is a newbuild vessel, constructed at Damen Shipyards Hardinxveld, and is the second vessel built to a new Damen Renewables Service Vessel design.

The RSV was commissioned by Seafast Marine for use in the offshore and onshore wind industries. As a business based in Ross-shire in Scotland, Seafast Marine was happy to see it painted in the colours of the country’s Saint Andrew’s flag.

The Damen RSV 3315, evolved from the Multi Cat, is a powerful multi-purpose working vessel, designed to work in shallow as well as deeper waters.

She features four azimuth thrusters, a DP2 4-point mooring system, two large cranes, hydraulic shark jaws and an AHT winch. The RSV’s versatility allows it to be used for a range of duties such as anchor handling, dredging, towing or walk-to-work functions.

Despite its strong, durable hull and the on-board equipment, the vessel’s gross tonnage comes in at under 500 tonnes, contributing to its high level of manoeuvrability.

The wheelhouse provides 360-degree visibility and sky windows, for the best possible vantage point. Internally, the vessel’s galley is fully equipped, and there are six double crew cabins and three single crew cabins, providing berths for up to 15 crew.

Isle of Jura was handed over by Damen Shipyards Hardinxveld director Jos van Woerkum. The shipyard also presented Seafast Marine with a scale model and a framed picture of the new vessel. 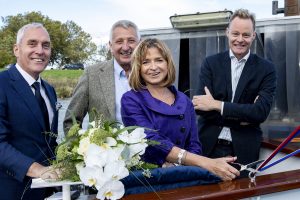 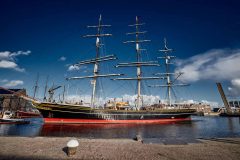 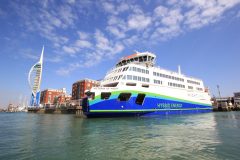